I’ve built a lot of custom electronic toys over the past 2 years.  Mostly for my son, he loves them.  He gets very excited when he sees me working on a new one.  I hope this will get him interested in electronics and engineering in the future.

These are his favorite so far: 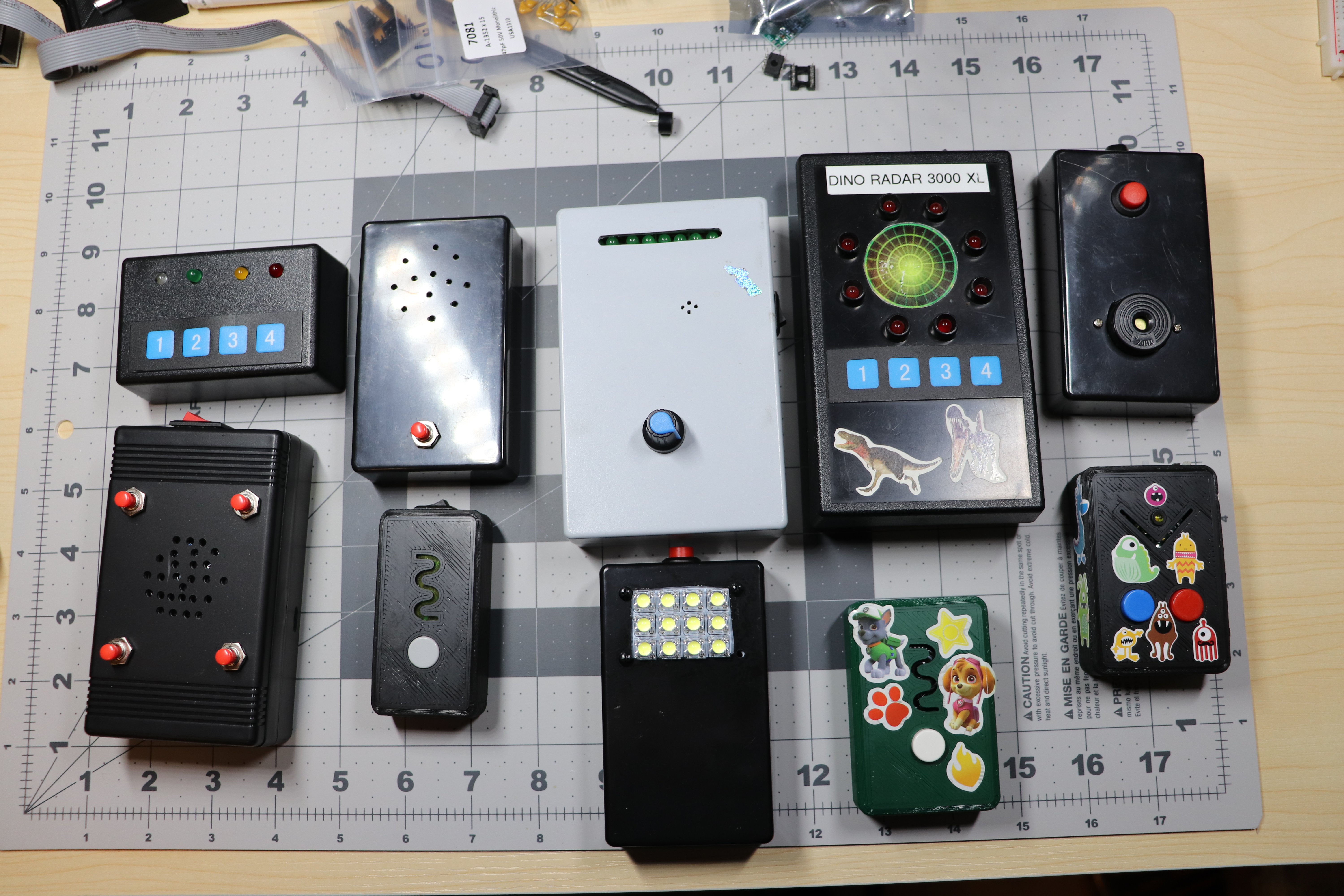 I’ll describe each toy starting from the top left to bottom right.

Press one of the numbers and one of the LED’s turns on.  Simple circuit powered by a 9-volt battery. This was the first toy I built for Nolan.

Press the button, and it plays a dog barking sound.  Powered by a dog barking module that you can find on eBay for a dollar.  The one I used is here.  Easy circuit to wire and is powered by 3 AA batteries.

This toy simulates the Knight Rider LED but in green.  You can control the speed with the potentiometer knob. It will also play a beep sound when the light moves.  This is powered by an ATtiny13A with AVR C. I used a shift register to control the LEDs.  Uses 2 AAA batteries.

Simulates a radar display with a ring of red LEDs. Pressing the first button changes the pattern and speed.  You can see it in action here.  I used an ATtiny44A and wrote the code using Mikrobasic for AVR.  It is powered by 2 AAA batteries. This was the second toy I built for Nolan while I was still learning electronics.  I plan to make a newer version with sound and an LCD display.

This is a ticking time bomb toy that uses a small vibration motor to “explode” once the countdown finishes.  It flashes an LED and plays a ticking sound at an increasing rate until time runs out.  Nolan loves this toy, he holds it up to my body and smiles as he waits for the time to run out.  This was built using an ATtiny13A with AVR C.  It is powered by a 3-volt CR2032 coin cell battery.

Not as much a toy but an MP3 player. It uses a micro SD card loaded with Nolan’s favorite songs.  I used an MP3 player module that you can buy off eBay for about a dollar. See here.  You can add MP3 audio to almost anything using this module.  It has a built-in speaker and rechargeable battery that you can recharge by connecting a USB cable.

This little toy flashes LEDs back and forth when you first turn it on. Press the button once to start playing music when you think you found a bug, press it again to trigger the bug alarm which will begin playing more intense music and turn on the vibration motor.  I built this using an ATtiny85 with MikroC for AVR.  It is powered by a CR2032 coin cell battery.  I made the enclosure with my 3D printer.  It has Nolan’s name on the back.

Sort of a toy. Turns on the LED panel for 3 seconds whenever it detects a loud noise.  I used a sound detection module and a 555 timer.  It is powered by 3 AAA batteries.

Press the button to play a siren alarm sound.  I used a siren alarm module and a coin cell battery.  The enclosure was an early bug scanner prototype that I had laying around.

Very similar to the Bug Scanner, I actually built this one first.  It uses rainbow LEDs that will flash at different intervals.  Press the blue button to start playing the monster scanning music. Press the red button the trigger the monster alarm which will play more intense music and turn on a vibration motor. See it in action here. I used an ATtiny44A with Mikrobasic for AVR.  It is powered using a CR2032 coin cell battery.

See it here.  This Death Star will start playing the Imperial Death March song whenever you put it next to a magnet. I used my 3D printer to make the Death Star from a model I found on Thingiverse here.  I used an ATtiny85 with AVR C.  It took forever to get the song right.  It is powered by a CR2032 coin cell battery.  I’m planning on making a bigger version later.

I hope to find some time to start writing tutorials on how to create your own versions of these toys soon.  I plan on building more since my son loves them.  The next toy will be based on a PIR motion detector.